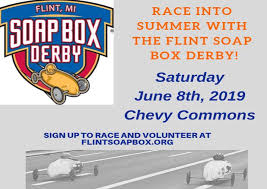 FLINT, Mich. –  After decades without an official local race, the Flint Soap Box Derby returns this summer as an educational and athletic pursuit for local youth with a day of racing this Saturday, June 8, at Chevy Commons from 8:00am – 4:00pm.

“The Soap Box Derby has a wonderful legacy across the Greater Flint Community, and it’s a thrill for racing to begin in the area once again,” said Kevin Cronin, Executive Director of the Flint Soap Box Derby. “Hosting the first race at Chevy Commons carries additional meaning and is one of many ways we intend to honor our local community as a youth program.”

“This is racing at its purest and is a natural community event for the City of Flint,” said Race

Director Jenn Baugher. “It’s important that Flint has a representative at the All-American Soap

Flint hosted its first Soap Box Derby in 1936, but this will be the first local race since the mid1990s. As an educational and athletic program for local youth, the Flint Soap Box Derby offers hands-on science, technology, engineering and math learning in an interactive environment.

There will be one sanctioned race in the All-American Soap Box Derby’s Super Stock Division, which will include participants from the Boys and Girls Clubs of Greater Flint; Freeman Elementary School; Beecher Middle School; St. Pius X Catholic School; and, Springview Elementary School. The winner of the Super Stock Division will qualify for the 82nd First Energy All-American Soap Box Derby Race Week, scheduled for July 14-20 in Akron, Ohio. Additional sanctioned races to include the Stock and Masters Divisions are expected during future local races so that the City of Flint will have multiple representatives competing for a world championship. At the conclusion of the sanctioned race, a non-sanctioned open racing division will be available for anyone wishing to further participate in the day’s activities.

In advance of the first race, the Flint Soap Box Derby hosted a series of vehicle assembly workshops on Saturdays throughout May. During these workshops, participants collaboratively assembled their vehicles under the guidance of skilled volunteers and event sponsors.

“We want all of our events to be as engaging as possible in all phases, beginning with assembling the vehicle through the crossing of the finish line. Not only do we believe these efforts will build critical skills, but we also know they’ll build friendships and a sense of community that will last,” Cronin said.